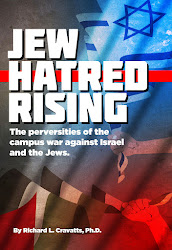 In a new e-book released this week by the David Horowitz Freedom Center, author Richard L. Cravatts, Ph.D. exposes the lies and misrepresentations of the pro-Palestinian movement on American campuses, revealing its true roots in the ancient animus of Jew hatred and the genocidal threat of Islamic supremacism.

The e-book is titled, Jew Hatred Rising: The perversities of the campus war against Israel and the Jews, in which Cravatts describes in detail the hostile climate that BDS activists have created for Jewish students on campus who are accused of racism for supporting a Jewish state and denied equal participation in student affairs. He also parses the warped logic of pro-Palestinian activists who declare Israel to be illegitimate while championing the non-existent nation of "Palestine."

"The notion of 'two states living sides by side in peace,' as the oft-repeated refrain goes, is, and always has been, of complete irrelevance to the Arabs," writes Cravatts. "The creation of a new Arab state is not the sought-after goal; what is the actual goal is the extirpation of the Jewish one."

ABOUT THE AUTHOR: Richard L. Cravatts, Ph.D. published over 350 articles, op-ed pieces, columns, and chapters in books on campus anti-Semitism, campus free speech, terrorism, Constitutional law, Middle East politics, real estate, and social policy, and is the author of the book, Genocidal Liberalism: The University’s War Against Israel & Jews. He is also a frequent guest on radio programs and lectures nationally on the topic of higher education and the Middle East.

Posted by Sandy Frazier at 6:06 PM