SandyPundits Goes to the 2016 RNC Convention 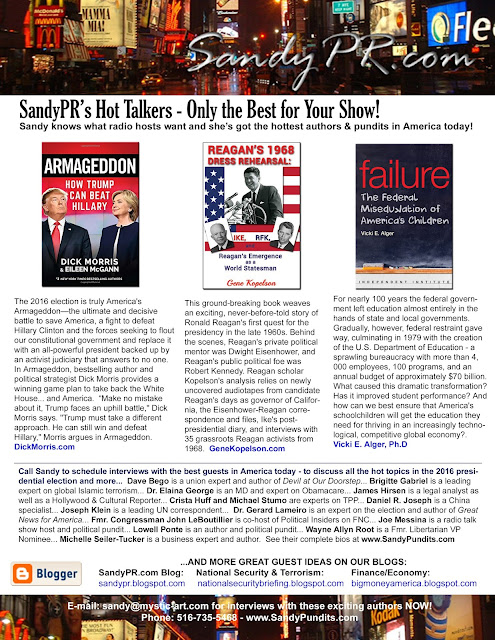 Posted by Sandy Frazier at 8:34 PM No comments:

Education, being one of the top issues debated by the presidential candidates, is very much on the minds of all Americans.  Trump advocates for school choice, refers to common core as a "disaster," and is calling for an end to the Department of Education. Clinton wants to socialize students and believes that it takes a village to raise a kid. In an important new book, education reform expert Vicki E. Alger, Ph.D., author of FAILURE: The Federal Misedukation of America's Children, shows us what the problems are and offers sound strategies toward improving on the failures of America's educational system.

In FAILURE, you'll learn that for nearly 100 years the federal government left education almost entirely in the hands of state and local governments. Gradually, however, federal restraint gave way, culminating in 1979 with the creation of the U.S. Department of Education - a sprawling bureaucracy with more than 4,000 employees, 100 programs, and an annual budget of approximately $70 billion. What caused this dramatic transformation? Has it improved student performance? And how can we best ensure that America's schoolchildren will get the education they need for thriving in an increasingly technological, competitive global economy?

When President Jimmy Carter established the U.S. Department of Education (ED) in 1979 as the thirteenth cabinet-level agency, the advocates of a larger role for the federal government in education hailed it as a hard-won victory for America's taxpayers, educators and school children. But thirty-six years later, ED has yet to live up to the promises, which tells us:

After providing a history and assessment of federal involvement of education (including a comparison with top-performing education systems worldwide), FAILURE offers a way forward. Dr. Alger's steps include:

Federal involvement in education, FAILURE shows, has been an epic failure - a failure of ineffective educational programs, a failure with massive wasteful spending, and a failure of the Department of Education to be a partner with state and local governments. Fortunately, Dr. Alger's rigorous assessment enables her to identify and articulate the best strategy for success - namely, decentralizing education policy by ending federal involvement, returning power to state and local governments, and implementing parental choice. [more...]

ABOUT THE AUTHOR: Vicki E. Alger, Ph.D., is Research Fellow at the Independent Institute and the author of more than forty education policy studies. She has provided expert affidavits for the successful legal defense of educational choice programs for low-income, foster-care and disabled children. Her work was also used in the successful legal defense of tax-credit scholarship programs in the U.S. Supreme Court.
Posted by Sandy Frazier at 10:19 PM No comments:

Ronald Reagan Teaches from The Past

Learning From Reagan's Past

With the presidential election heating up daily and the media, the GOP and Republican Nominee, Donald Trump constantly making references to President Reagan's much-admired accomplishments, comes a very unique book about our 40th President.  Heralded by Hon. George P. Shultz, Secretary of State under President Reagan and renowned Reagan historians alike, Reagan's 1968 Dress Rehearsal: Ike, RFK, and Reagan's Emergence as a World Statesman is an inspiring never-before-told history of how Ronald Reagan began to restore pride in America when he first ran for president in the late 1960s.

Author and historian, Gene Kopelson's tireless research uncovered findings based upon never-before-analyzed critical archives. He reveals may lessons President Reagan can teach us today that mirror the past.

America is torn by racial strife, as blacks riot in the cities. A Democrat president is mismanaging a war in Asia, as he refuses to let American forces win the war. A Democratic leader sides with the law breakers and says that blacks do not have to obey the law. Is this 2016? No, it's the mid-1960s, and the only candidate running for the presidency who wants the rule of law to be paramount and to apply equally to all American citizens is the Republican candidate running for president for the first time: Ronald Reagan.

As part of a secret Kennedy-organized plan to harass conservative political enemies, RFK arranges for the IRS to audit ten years of Ronald Reagan's taxes. Then RFK pressures CBS to cancel Reagan's TV show. Faced with no income, Ronald Reagan decides to enter politics but needs the advice of a highly-respected senior political elder of the same conservative philosophy.

Reagan turns to former President Dwight Eisenhower, and this begins a never-before-described multi-year political mentorship and friendship that changed American and world history. Eisenhower guided Reagan to win the governorship of California and then, as Reagan first sought the presidency in 1967-68, Ike mentored Reagan on world affairs. Indeed, future President Ronald Reagan's successes in no small part depended upon his fulfillment of Ike's policies, whose effects are very much with us today.

A steadfast and principled conservative is running for president for the first time. He is an accomplished speaker who electrifies his audiences but is opposed by the GOP's establishment. Yet the grassroots American public loves him. Is this 2016? No, it's 1968 and Ronald Reagan is generating huge enthusiasm across the country as he tries to win the nomination from establishment-favorite Richard Nixon.

Early in the 20th century, Republican President Theodore Roosevelt first called for Americans never to be divided into subgroups; he wanted all citizens to be called Americans first. Yet Democrats call for division: they call Americans by hyphenated subgroups to promote discord: Black Americans, Mexican Americans, etc. In the mid and late 1960s, Roosevelt's call was continued by Republican Ronald Reagan on his first quest for the presidency and by his hidden political mentor, Republican and former president, Dwight Eisenhower. They saw through the Democrats' plan for divisiveness in order to claim grievances and garner votes.

Both Reagan and Eisenhower called for all citizens to see themselves as Americans first and to identify with the pride and goodness of their country. During Reagan's first campaign for the presidency in 1966-1968, and in the correspondence between Reagan and Ike, this theme of discarding the Democrats' "hyphenated Americans" was a critical theme for the unity of all Americans.

Go here to see Gene and the book featured on C-SPAN.


ABOUT THE AUTHOR: Gene Kopelson is president of the New England chapter, and on the Board of Trustees, of the Theodore Roosevelt Association, an active Churchillian, and a holocaust educator. As an historian, he has published works on Theodore Roosevelt's Great White Fleet, Ronald Reagan's 1966 campaign and Mexican American voters, the 1968 Nebraska and Oregon Republican primaries, and Washington State Republican politics in the 1960s. His research on Reagan and Eisenhower was featured in 2015 at the 125th Commemoration of the Birth of Dwight Eisenhower at the Dwight D. Eisenhower Presidential Library.  Kopelson is a popular speaker and frequent guest on talk radio.
Posted by Sandy Frazier at 9:09 AM No comments: