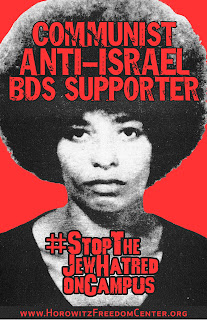 Posters allege BDS activists have “allied themselves with Palestinian terrorists” and “perpetrate... Jew hatred on this campus.”

The David Horowitz Freedom Center claimed credit today for posters that appeared on the campus of UC-Santa Barbara attacking the Boycott, Divestment and Sanctions (BDS) movement against Israel as a “Hamas-inspired genocidal campaign to destroy the world’s only Jewish state” and naming individual students and faculty members who promote BDS on the Santa Barbara campus.  David Horowitz, President of the Freedom Center, commented, “We’ve decided to get up close and personal with merchants of Jew hatred on our campuses.”

Several versions of the posters were hung on campus late last night in a guerilla campaign to draw attention to the problem of Jew hatred at UCSB. In addition to defining the BDS movement as a genocidal campaign to wipe out Israel, one poster names a number of prominent campus BDS activists and states, “The following students and faculty at UC Santa Barbara have allied themselves with Palestinian terrorists to perpetrate BDS and Jew Hatred on this campus.” [more...]

Posted by Sandy Frazier at 7:55 PM No comments:

Posted by Sandy Frazier at 7:44 AM No comments:

The 30-Minute Millionaire
The Smart Way to Achieving Financial Freedom

With jobs and the economy weighing heavily on the minds of Americans as we all listen to the presidential candidates offering supposed solutions, investing experts and best-selling authors Peter J. Tanous and Jeff Cox present their new book, The 30-Minute Millionaire - a guide to smart investing based on many years of experience - a step-by-step guide to achieving financial success.

Whether you're new to investing or already preparing for retirement, the authors provide practical advice with specific examples, giving you the tools and knowledge you need on your path to becoming financially secure. In this book, you'll learn how to:

The authors also give detailed instructions on exactly how much cash you'll need to start (less than you think!) and the best advice from financial gurus on your journey ahead. Stop trying to actively pick stocks, trade in and out of positions, analyze the data only the wonks understand, or time the markets.  Get on a simple, true path to financial freedom today with The 30-Minute Millionaire.

"Who better than two keen observers of markets to guide us to successful wealth accumulation in a world flooded with information containing lots of signals and noise. By showing investors how to be a lot smarter about their time allocation, including what to look for and why, this book provides you with important and durable tips and insights."

Peter Tanous - President of Lynx Investment Advisory. Over his forty-year career as a finance professional, he has held executive positions at Smith Barney, Bank Audi (U.S.) and served as chairman of Petra Capital Corporation, an international investment bank that he co-founded. Tanous is the author of several critically acclaimed books including Investment Gurus, Wealth Equation, and Debt, Deficits, and the Demise of the American Economy.
Jeff Cox has worked as a journalist since 1987 and is a staff writer with CNBC.com where he covers all markets and frequently appears on CNBC TV. In addition, he provides market commentary for radio stations across the country and his articles often run on TheStreet.com, Yahoo!, and AOL Money. Cox has also worked at CNN Money and as a senior editor for two Pennsylvania newspapers. Author of Debt, Deficits, and the Demise of the American Economy.