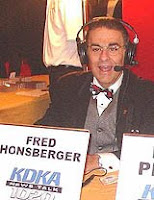 The calls poured in during KDKA-AM talk host Fred Honsberger's air shift yesterday. One after another, listeners paid their respects to a silenced Pittsburgh voice during a program that became a three-hour tribute -- to its host.

Mr. Honsberger died yesterday morning at his home in Monroeville, following a long battle with various health issues. He was 58.

One of the city's longest-running talk show hosts, he could be combative and opinionated, but colleagues, guests and callers recall qualities that set him apart from the typical image of the talk host who shouts down listeners when they disagree.

Mr. Honsberger hosted a popular afternoon drive talk show on KDKA since the George H.W. Bush administration. In January, he moved to the noon-to-3 p.m. shift -- opposite syndicated conservative talker Rush Limbaugh, but continued to hold court and engage listeners on both local and national issues. [more...]

SandyPR.com sends condolences to family, friends and the radio listeners... We booked our pundits and guests on Fred's show many times over the years and I'm sure he'll be sorely missed!
Posted by Sandy Frazier at 4:26 PM No comments:

On a gorgeous Southern California Saturday afternoon in La Canada, friends, family and colleagues met on the lawn of the Jeffers Estate to pay tribute to the bigger-than-life presence of L.A.’s own news personality, George Putnam. George died September 12 at the age of 94.

Against a patriotic backdrop, the American Legion started the event with a presentation of colors. George’s last media outlet before he died was on Cable Radio Network (CRN). Mike Horn, the president and ceo of CRN, introduced George’s theme music, Harry Nilsson’s Everybody’s Talking. “We enjoy Vin Scully, we listen to the Dodgers,” said Horn, “but part of our Southern California fabric is the man we’re honoring today – George Putnam. Wherever George was – Channels 11, 5, KIEV or CRN – it was appointment radio or appointment tv. You had to be there when George was on the air. To this day there’s no one in broadcasting who can claim appointment radio. He was part of our Southern California and there for us at all times. No matter where George was, we were there.”

Chuck Wilder was George’s producer for the past 26 years. “We were partners in crime,” Chuck said in addressing the crowd. “I don’t think anyone enjoyed being on the air as much as George. When he broke his neck tripping over ‘Wally George’ [all of George’s dogs were named after famous people] he wanted to be on the air while he was in the hospital. He would get the engineers upset when he would say, ‘You can send a man to the moon but we can’t get these telephones to work.’ He wanted to get a broadcast line into the hospital.”

Wilder shared a story of when they were broadcasting from the underground shopping center of the ARCO Plaza Twin Towers. They were waiting for two special guests to arrive. Ten minutes before broadcast time, there was a bomb scare. “George said he was staying put. The Arco building management and security couldn’t get George to leave. Then here comes this very petite woman in a LAPD uniform. George had great charm with woman. He looked at her and said, ‘everything’s okay. We’re staying here.’ She said, ‘No you’re leaving.’ They went back and forth and his charm wasn’t working. All of a sudden this little LAPD lady puts her hand on her gun and George gets up and says, ‘We’re leaving.’ When they were leaving the studio, I swear he was trying to get an interview with her.” Chuck said it turned out to be a good decision to leave because police found 100 sticks of dynamite not too far away.

Ray Briem, former KABC and KIEV talk show host, told the crowd he wanted to give thanks to George Putnam. “The icon I saw on television, which was a new medium then , was George Putnam and I would watch George every single day. He became the man I wanted to be,” said Ray. After Ray left all-nights at KABC, George was very instrumental in Ray going to KIEV. “We had something in common– we both supported Proposition 13,” the Howard Jarvis proposition that limited property taxes to 1% of evaluation. “Howard Jarvis said in his book if it weren’t for George and Ray there would have been no Proposition 13.”

Briem concluded his remarks: “I thank George for inspiration. I was always in his shadow and I was always learning from him.

When KABC morning man Doug McIntyre was asked to speak at Putnam’s Celebration of Life, he couldn’t say yes fast enough. Doug was a big fan. “One day my call screener says George Putnam is on the phone and wants to go on the air. I had heard that George listened every day. Well, that’s not right. It should be the other way around and it was the other way around, believe me.”

McIntyre talked about George’s ideals. “George understood that excessive partisanship turns people into robots. Remember that George went to his grave as a Democrat. The Democrats may have given up on what George believed but he never gave up on them. He never gave up on community. He was the one who introduced the illegal immigration issue 45 years ago and maybe some day the LA Times will even cover it. He was way, way ahead of his time on that. This was a guy who understood that America was a special gift to the world and it needed to be preserved and needed to be taught and passed along to the next generation.”

Former KABC talk show host Bruce Herschenson said that listening to George Putnam was “contagious.” Bruce said that George invented the idea of separating news from opinion. “He ended up his newscasts with ‘one reporter’s opinion.’ And then he would show the American flag flying over a different location every day. I felt sorry for the cameramen who had to find these flags.”

“I was in an election and lost,” Bruce continued. “The phone rang and it was George Putnam and he offered a forum or podium. He said his microphone was mine. He had a habit of being there when you needed him, not when he needed you. I learned a lot from that guy. For almost a century, George Putnam didn’t just live in this country, he made it better.”

Posted by Sandy Frazier at 6:30 PM No comments:

Michael Medved at the Book Revue 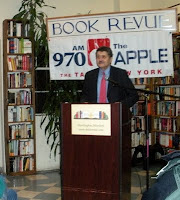 Michael Medved spoke to a group at The Book Revue in Huntington, NY tonight about his new book, THE 5 BIG LIES ABOUT AMERICAN BUSINESS: Combating Smears Against the Free-Market Economy. The Q&A was fascinating and the audience learned so much from Michael's great wisdom.

Michael Medved's daily three-hour radio program, The Michael Medved Show, reaches more than two million listeners coast to coast. He is the author of nine other books, including the bestsellers Hollywood vs. America and What Really Happened to the Class of '65?, and is a member of USA Today's board of contributors. For more than a decade he cohosted Sneak Previews, PBS's weekly movie review show. Watch Michael on MSNBC's "The Ed Show."
Posted by Sandy Frazier at 8:14 PM No comments: