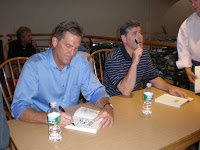 It was standing room only at the Book Revue in Huntington, NY Saturday night as Sean Hannity introduced his good friend and author, Don Corace, at a book signing for Corace's new HarperCollins paperback, Government Pirates. "If you want to know what an Obama presidency will be like, read this book!" Hannity declared as he introduced Mr. Corace to a very receptive crowd. Government Pirates: The Assault on Private Property Rights - and how we can fight it is a shocking expose into how government officials can take your property if they so choose - for a wide variety of shady reasons. Corace offers a groundbreaking in-depth look at eminent domain abuse and other government regulations that are strangling the rights of property owners across America. Call now to interview Don - your audience will thank you!
Posted by Sandy Frazier at 10:41 AM No comments:

John LeBoutillier a Regular on Imus

Our good friend Fmr. Congressman John LeBoutiller will be a regular on Imus in the Morning Friday mornings at 8:05am ET. Listen for him on the ABC Radio Networks.
Posted by Sandy Frazier at 1:31 PM No comments:

SandyPR.com is proud to welcome Bill Glynn, author of Left on Red (Wiley & Sons), who is a successful serial and parallel entrepreneur, philanthropist, and visionary voted one of the world's top 15 innovators by Information Week. He is a venture capitalist and advisor to an elite clientele of fortune 1000 companies and executive and leader in the entertainment, music, science and technology fields across the world. In plain English, he's a financial wizard! Look for his blog/rants starting Monday June 14... and call Sandy for interviews with Bill.
Posted by Sandy Frazier at 11:18 AM No comments:

NozzleRage: America's Humorous Antidote to Fuming at the Gas Pump

Every American is getting hosed. Each time we fill up our gas tanks, we are putting money into the hands of OPEC - the oil cartel led by Saudi Arabia. The Saudis and the other countries that make up that monopoly control most of the world's reserves. Most of them pay just a couple of dollars per barrel to get oil out of the ground.

Yet, OPEC is limiting production and encouraging speculation that is costing us and other consumers hundreds of billions of dollars every year. It amounts to the largest artificially engineered transfer of wealth in history. OPEC is waging economic warfare, and it is bleeding our country dry.

Worse still, some of the oil money the Saudis, Iranians, Venezuelans and other OPEC members get from us is being used to support terrorism. We are literally paying people to try to kill us.

This is clearly a ridiculous and unsustainable situation. If not corrected, we are going to bleed out as we underwrite our destruction.

NozzleRage is a video campaign designed, through viral YouTube and Internet distribution, to make clear what is happening to this country and its drivers. Its goal is to channel the fury most Americans feel into effective action. Go Here Now to watch the video on YouTube.

The first of a series of 30-second NozzleRage videos features an OPEC gas pump ripping off and then attacking an ordinary American consumer. Conceived, directed and produced by the fabled Hollywood team of David and Jerry Zucker, it directs viewers to the http://www.nozzlerage.com/ Web site where they can register to view upcoming videos and find out what they can do to end our suicidal vulnerability to OPEC's oil cartel.

NozzleRage's message is supported by a number of the nation's leading advocates for energy security including Frank J. Gaffney, Jr. (of the Center for Security Policy), who is available for interviews now. Go Here Now to see Frank Gaffney on Fox Business Network. And on FNC...
Posted by Sandy Frazier at 10:08 AM No comments:

MAN OF THE PEOPLE: THE MAVERICK LIFE AND CAREER OF JOHN McCAIN - Revised and Updated for the 2008 Presidential Election
By Paul Alexander

Virtually the ONLY McCain biography available, Paul Alexander's MAN OF THE PEOPLE: The Maverick Life and Career of John McCain paints a balanced, thoughtful portrait of the man who may be the next President of the United States. Readers, regardless of their political persuasions, will find MAN OF THE PEOPLE a must-read during a Presidential campaign that will clearly be a watershed in American politics and history.

Much of the controversy surrounding John McCain, argues Alexander, is owing to the fact that McCain is a centrist. In his overall political agenda, McCain can be seen as progressive on some issues, conservative on others. In foreign policy, he is neither an isolationist nor one who endorses nation-building. His acknowledgement of the importance of the global community of nations suggests he is less likely to pursue a unilateralism that can spell disaster - the type of unilateralism that drove the Bush administration's war in Iraq.

On the environment, McCain has evolved as a progressive. A skeptic about global warming when he first arrived in Congress, he has evolved over time to become one of the most ardent proponents of initiatives to protect the environment.

On social issues, he has proved harder to define. He has been a steadfast defender of the right to life, yet has repeatedly said he is not in favor of overturning Roe v. Wade. On gay issues, he continues to support "don't ask, don't tell" and opposes gay marriage. Yet he also attacked the Federal Marriage Amendment, a cornerstone of President Bush's reelection platform in 2004.

On fiscal issues, he has proved himself to be a conservative - at least to a point. He endorses the fundamental tenet of fiscal conservatism, which says spend only what you have. But while he supported the tax cuts of the Reagan administration, he opposed the Bush administration's tax cuts because they gave too much to the most fortunate among us and too little to those who need tax relief most. A cornerstone of his political career has been his fight against government waste and pork-barrel spending; curtailing both, he believes, could help bring into line a federal budget that is currently out of control.

Among the many issues, MAN OF THE PEOPLE explores are:

* New information about the campaign staff shake-up last summer that saved McCain's faltering presidential bid, and how the shake-up forced him to make the agonizing decision to fire longtime friend and political adviser John Weaver.
* How McCain's career shifted from a stalwart Reaganite to a moderate, independent Republican whose focus has been campaign finance reform, gun control, and environmental issues.
* Why Rush Limbaugh and Ann Coulter hate John McCain and how the conservative base of the Republican Party's distaste for McCain will affect the general election this November.
* A new analysis of how, for much of the presidency of George W. Bush, McCain has fought hard in the United States Senate to undermine a large part of the Bush agenda, undercutting any claims to be made in the upcoming presidential race that a McCain presidency would represent a continuation of Bush policies.
* The most extensive examination to date of the character assassination of John and Cindy McCain carried out by Karl Rove during the 2000 South Carolina primary, which led one top McCain aide to call the 2000 Presidential race "the dirtiest race I've ever seen."
* His military career from his days at the Naval Academy to his time as a POW, and the profound hatred for war that emerged from his wartime experiences.

Alexander says that, ultimately, McCain is virtually impossible to pigeonhole as he, more often than not, strives for the middle ground, which is why he so often teams up with Democrats to produce meaningful legislation that can be passed by Congress and signed into law. His affinity for the common ground, his desire to govern from a consensus, is what makes him appealing to Independents as well as mainstream Republicans. A centrist, not just on foreign policy but also on domestic policy, he is running for president to return the country to the middle of the political spectrum. About Paul Alexander
Posted by Sandy Frazier at 9:20 AM No comments: