Wayne Root's Got the Winning EDGE

Las Vegas Oddsmaker Wayne Allyn Root, Dubbed by National Media "the King of Vegas," Offers his Expert Analysis and Commentary to Media for College Football Bowl Season & NFL Post Season
“Wayne's the king of sports handicappers…he's the Warren Buffett of his world.”
--James J. Cramer, CNBC Host of “Mad Money”
College Football Bowl Season is underway. Millions of American sports fans will be wagering billions of dollars on these 35 Post Season games. Then the NFL Post Season starts - and the betting there will dwarf the Bowl Season. Over $6 billion will be bet on just one game - the Super Bowl.
Your audience will want expert commentary and analysis on these games. They want to hear "what Vegas thinks."
One man stands out as "the Jimmy The Greek" of our generation. That could be because as a 27-year-old, he became Jimmy the Greek's television partner and co-host at CNBC (then called Financial News Network). The baton was handed off. "The Greek" was soon sent off into retirement and his young co-host became a star. Wayne Allyn Root is quite simply the most honored professional sports handicapper and Vegas oddsmaker in the world. He is the brand name of sports gaming - dubbed by the national media as “the King of Vegas,” “The Face of Las Vegas Gambling,” “America's Oddsmaker,” and “The Prince of Prognosticators."
Wayne is the only oddsmaker or professional sports handicapper to ever be awarded his own star by the Las Vegas Walk of Stars (in front of New York New York Casino Resort). Over 3 million sports bettors have called Wayne for his advice - more than any sports handicapper in history. It is estimated that over $3 billion dollars per year is bet on Wayne's advice. But Wayne is much more than an oddsmaker; he is a CEO, best-selling author, and national media personality. Wayne makes over one thousand media appearances per year, appearing on Fox News, Fox Business, CNBC, MSNBC, CNN, and hundreds of radio stations across the country to talk, debate and infuriate on the topics of politics, business and sports.
Now Wayne is available to talk NCAA Bowls, and NFL Post Season on your TV or radio station this Holiday Season. Wayne is dynamic, charismatic, colorful, controversial, fiery, outspoken, and telegenic. Your audience will love him or hate him - but no one will ever tune out! [Go to Wayne's site now...]
Posted by Sandy Frazier at 7:54 AM No comments:

I was privileged to be invited to the home of Mitzi Perdue last night at 5th Avenue in Manhattan - a gorgeous place overlooking all of Central Park and what seemed to me to be the most stunning view I'd ever seen from an apartment in NYC.  Mitzi is the wife of the late Frank Perdue, "the chicken man" and her wonderful EggScapes (decorated eggs) were on display all over her elegant apartment.
The event was a book party and signing for Rita Cosby's latest book, Quiet Hero written about her father who was a POW and war hero, the proceeds which benefit The USO and Wounded Warriors.
She was also there for Robert Cancro, Chairman Emeritus of NYU's Dept. of Psychiatry, who launched the United Stress Disorders Association and announced Rita as its spokesperson in support of vets who suffer from PTSD, which I can relate to since both my father and stepfather suffered from it after their service in the Korean War. [more...]
[see the photos here]
Related blog: Nick Popaditch and VET Foundation
Posted by Sandy Frazier at 10:30 AM No comments: 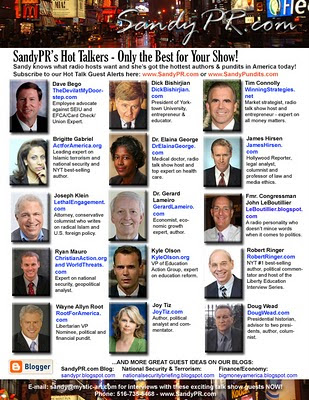 Showdown With Evil By Jamie Glazov

You probably know Dr. Glazov as the Editor of Frontpagemag.com and from his critically acclaimed and best-selling book, United in Hate: The Left's Romance with Tyranny and Terror.
Showdown With Evil: Our Struggle Against Tyranny and Terror is a collection of Dr. Jamie Glazov's best interviews, while serving as editor of Frontpagemag.com, with the leading intellectuals and newsmakers of our time - all of whom contribute to understanding, and opposing, radical Islam and its leftist apologists.
Glazov, whose parents were dissidents in the former Soviet Union, shows in his conduct of these top-notch interviews that he understands the values of freedom and the need to fight for it.
The collection, which begins with a Foreword by Richard Perle, former assistant Secretary of Defense for the Reagan administration, offers a powerful and honest assessment of the implications of the threat we face in our terror war - as well as a warning that should not go unheeded. It's a powerful crash course in how to protect American liberty from its totalitarian enemies.
This collection of 29 interviews conducted over the course of the last several years by Jamie Glazov is relentlessly fascinating and engaging. As former Asst. Secretary of Defense Richard Perle states in the foreword, this is "an illuminating and important commentary on the largest issues facing America and the West," particularly the "Islamist agenda that has replaced communism as the principal threat to western values and civilization."
Glazov probes the impressive minds of some courageous conservative intellects like Victor Davis Hanson, Phyllis Chesler, Brigitte Gabriel, Andy C. McCarthy, Natan Sharansky, Christopher Hitchens, Theodore Dalrymple, Horowitz himself, even William F. Buckley, Jr., in chapters grouped into the following topics:

* Obama's Destructive Path
* Unholy Alliance
* Islam: The Religion of Peace?
* The Terror War
* The Evil Empire
* Leaving the Faith
* The Titans
* Looking to the Future of Freedom

If you are at all concerned about such issues as national security, Obama's impact on the future of America, the threat of fundamentalist Islam and the complicity of the Left, and the conflict between freedom and tyranny, then this collection is a must-have.
Lieutenant General Thomas McInerney, USAF (Ret.), has called Showdown with Evil "the most important book in America."
FrontPageMag Review
JihadWatch Review
Reviews
About the Author: Jamie Glazov holds a Ph.D. in history with specialties in U.S., Russian, and Canadian foreign policy. He is the editor of Frontpagemag.com and the author of the critically acclaimed and best selling, United in Hate: The Left's Romance With Tyranny and Terror. He is also the author of Canadian Policy Toward Khrushchev’s Soviet Union and is the co-editor (with David Horowitz) of The Hate America Left. He edited and wrote the introduction to David Horowitz’s Left Illusions.
Posted by Sandy Frazier at 7:40 AM No comments: