"The air is filled with lectures and rumors that our earth is getting warm. Casey has found evidence to the contrary." --Dr. Fumio Tsunoda, Professor Emeritus of Geology, Japan

Climate change has been a volatile issue for years, even amongst leading scientists and researchers from other disciplines. In his new book, Dark Winter: How the Sun is Causing a 30-Year Cold Spell, scientist John L. Casey, a former White House national space policy advisor, NASA headquarters consultant and space shuttle engineer, tells the truth about ominous changes taking place in the climate and the sun.

Casey's research into the sun's activity, which began almost a decade ago, resulted in the discovery of a solar cycle that is now re­versing from its global warming phase to that of dangerous global cooling for the next thirty years or more. This new cold climate will dramatically impact the world's citizens. In Dark Winter, he provides evidence of the following:
A sobering look at the Earth's future, Dark Winter predicts world­wide, crop-destroying cold, food shortages, and riots in the United States and abroad, significant global loss of life, and social, political, and economic upheaval.

About the Author: John L. Casey is the President of the Space and Science Research Corporation (SSRC), a leading independent research organization in Orlando, Florida. The SSRC specializes in the science and plan­ning for the next climate change to decades of cold weather, including its predicted concurrent ill-effects of record earthquakes and volcanic eruptions. The SSRC is the pri­mary U.S. advocate for national and global preparedness for this next cold-climate era. Mr. Casey is a former national space policy advisor to the White House and Con­gress, a space shuttle engineer, consultant to NASA Headquarters, and consultant to or president of several leading-edge technology start-ups.
Posted by Sandy Frazier at 10:14 AM No comments:

The Great Betrayal By David Horowitz

New York Times best seller David Horowitz's monumental work, The Black Book of the American Left - Volume III: The Great Betrayal, is an inquiry into the dark heart of the left - an exploration of how conservatives must respond to its permanent assault on America, and a unique trip log showing the evolving intellectual journey of one of our bravest and most original thinkers.

In The Great Betrayal, his third volume of The Black Book series, Horowitz provides a narrative of the controversies and confrontations over the Iraq War from its origins up to the death of Osama bin Laden. The "great betrayal" refers to the sabotage of this war by the Democratic Party and the political left. This volume focuses on events beginning with 9/11 and culminating in the Iraq War and discusses in depth:

The effort to remove the Saddam regime was initially supported by both major parties. But by the third month of fighting in Iraq, the Democrats had turned against the war they authorized in an effort to gain political advantage at home. They not only turned their backs on American troops in the field but also crippled efforts to curtail the terrorist activities of Iran, Syria and other Middle East regimes. Working in lockstep with radical leftist groups, the Democrats' sabotage of a war they had just authorized was unprecedented in U.S. history.  Horowitz shows how this great betrayal put our national security at risk and how the drift and appeasement it created continues to paralyze U.S. foreign policy today.

The basic facts of David Horowitz's political odyssey, one of the most significant of the last forty years, are well known A "red diaper baby" who grew up in the political ghetto of communism, he became a leading Marxist "theorist" in the early 1960s and one of the godfathers of the New Left. But following America's defeat in Vietnam, Horowitz began to reevaluate the damage those commitments had done to the country.  He realized that America was a good as well as a great nation, worth defending. This conviction led him toward the conservative movement of which he became a leading spokesman.

About the Author: David Horowitz is the bestselling author of numerous books including Unholy Alliance (2004), The Party of Defeat (2008) and Take No Prisoners: The Battle Plan for Defeating the Left (2014). His Art of Political War (2000) was described by White House political strategist Karl Rove as "the perfect guide to winning on the political battlefield."  David is the founder and chairman of the David Horowitz Freedom Center which is dedicated to the defense of free societies whose moral, cultural and economic foundations are under attack by enemies both secular and religious, at home and abroad.
Posted by Sandy Frazier at 12:24 PM No comments:

Barry Farber in the National Radio Hall of Fame 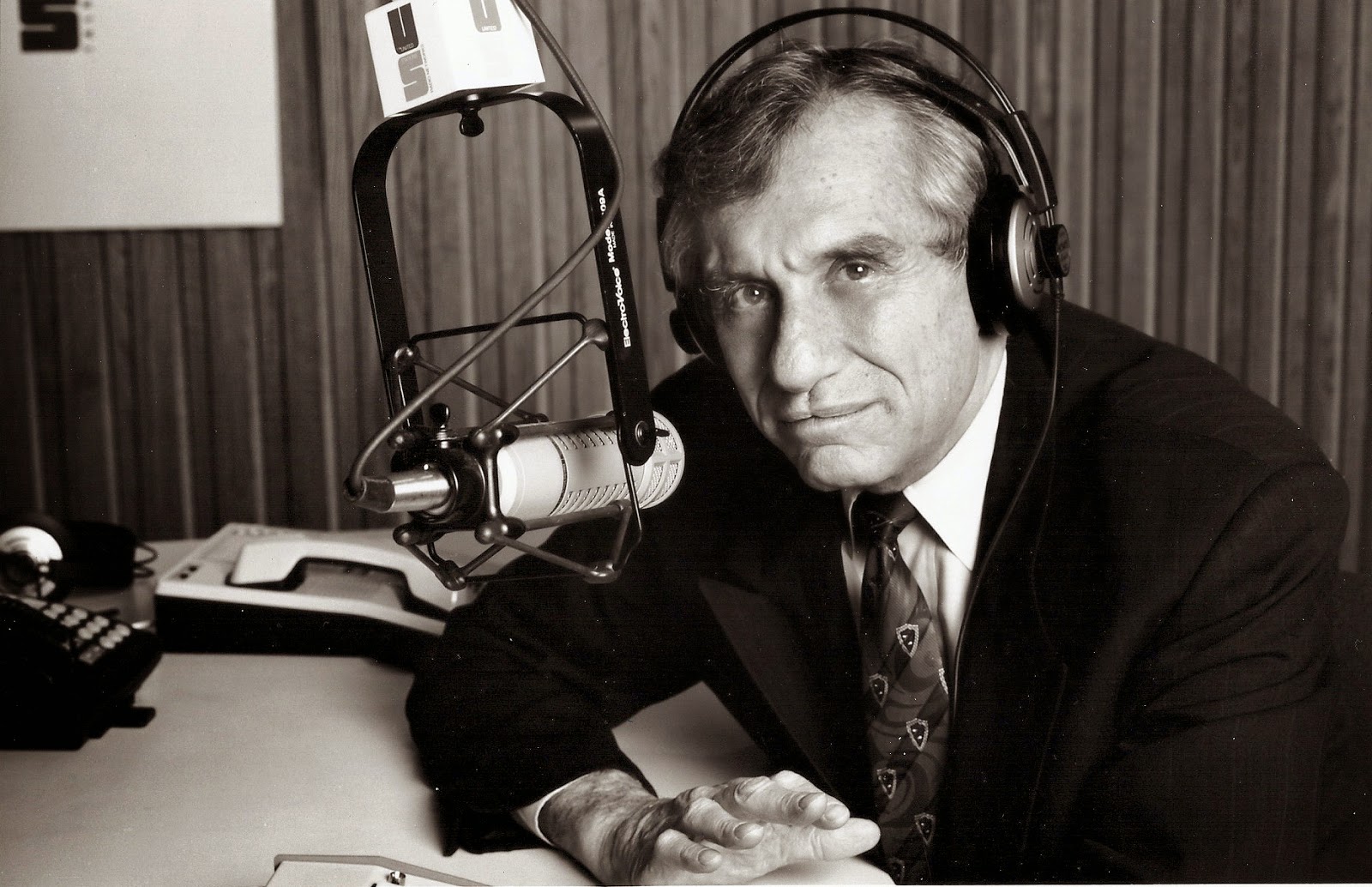 Barry Farber has been inducted into the National Radio Hall of Fame.  Congratulations, my friend!

Posted by Sandy Frazier at 8:19 AM No comments:

The Color of Courage By Julian Kulski

"The Color of Courage" Brings WWII to Life with Digital Extras:
11 Short Videos Created from Original Historical Film and Audio

World War II veteran, international architect and author Julian Kulski's book, The Color of Courage - A Boy At War: The World War II Diary of Julian Kulski, will be published by Aquila Polonica on Veterans Day.

The Color of Courage is a rare and vivid day-by-day eyewitness account by a young boy who becomes a man far too soon under the brutal Nazi German occupation of Poland. Julian is a 10-year-old Boy Scout when the Germans invade his native Poland to start World War II. At an age when most boys are still playing with toys, Julian begins his own private war against the Germans with small acts of sabotage. At 12, he is recruited into the clandestine Underground Army by his Scoutmaster, and begins training on weapons and military tactics.

By 14, he is holding up German soldiers at gunpoint, has gone on a secret mission into the Warsaw Ghetto to liaise with Jewish resistance leaders, is captured by the Gestapo, beaten and interrogated, sentenced to Auschwitz, rescued, and joins a Commando unit of the Underground Army. At 15, he fights in the Warsaw Uprising, ending the war as a German POW.

The war's end brings physical freedom but very little peace for the 16-year-old veteran suffering from PTSD (post-traumatic stress disorder). A wise army doctor advises Julian to write down his experiences to help lessen the psychological and emotional burdens of the war. The Color of Courage is the result. In this book, you will learn:
Originally written in Julian's native Polish, it has been translated into English and enhanced with more than 150 photos, maps and illustrations, and 11 short videos created from original historical video and audio material. These unique "digital extras," accessed via QR codes and URLs throughout the book, pack a powerful visual punch that brings the author's world brilliantly to life.

The foreword is by Lech Walesa, Nobel Peace Prize Laureate; the introduction is by Rabbi Michael Schudrich, Chief Rabbi of Poland. There are more than 150 photos, maps and illustrations, plus groundbreaking digital extras. Go here to watch the book trailer: www.polww2.com/CourageTrailer

ABOUT THE AUTHOR: Julian Kulski was born in Warsaw, Poland, in 1929. After the war, he came to the U.S., worked his way through Yale University, and built a new life here as a successful architect. Now semi-retired from a distinguished architectural career, Kulski has taught at Notre Dame University, George Washington University and Howard University. For twenty years he served as a consultant to the World Bank, designing buildings in twenty-nine developing countries. Author of several books and more than a hundred articles in professional journals, he is a frequent speaker to audiences of all ages.
Posted by Sandy Frazier at 7:58 AM No comments:


Posted by Sandy Frazier at 7:38 AM No comments: