New Book Examines Relationship between the President, the UN, and Radical Islam
By Joseph Klein

In his new book, Lethal Engagement: Barack Hussein Obama, The United Nations & Radical Islam, conservative columnist and United Nations correspondent Joseph Klein takes a critical look at President Obama's aggressive outreach to the Muslim world; his belief that the U.S. has a "moral responsibility" to lead the way toward a world without nuclear weapons even as he permits Iran to continue developing its nuclear arms capability; and his submission to the international consensus of the anti-Western United Nations.
Klein explains in Lethal Engagement how and why Obama is playing right into the Islamists' stealth strategy to undermine American laws, financial systems and democratic values that get in the way of radical Islamic priorities. This strategy includes manipulating our own laws and institutions against us in order to inject Sharia (Islamic law) into our legal and political system.
After exposing how radical Muslims are re-branding their barbaric ideology to deceive Americans, with President Obama's help, Klein offers solutions to take back our country.
Here are just a few of the multiple examples Klein provides in Lethal Engagement, from President Obama's words and actions, that should wake Americans up to the dangerous path the Obama administration is taking us down.  Klein explains how Obama is:
If you are tired of Islamists and their liberal elite supporters calling well-meaning American citizens 'bigots' or 'racists' for simply questioning what is behind the radical Islamic agenda and how President Obama is facilitating it, then you need to read Lethal Engagement: Barack Hussein Obama, The United Nations & Radical Islam, which will provide you with invaluable information gleaned from extensive, well-researched primary sources and from Klein's own pointed questioning of high level United Nations, Islamic and U.S. spokespersons at United Nations press briefings.
Read a review on Conservative Monitor and his interview on FrontPageMag.com.
About the Author: Joseph Klein is the author of Global Deception: The UN's Stealth Assault on America's Freedom. A Harvard Law School graduate, he is an attorney and columnist, contributing to FrontPage Magazine and Canada Free Press as their United Nations correspondent and is a featured blogger for News Real Blog. Joseph is a guest on talk radio and TV shows, including Fox and Friends.
Posted by Sandy Frazier at 6:42 AM No comments:

Will Americans Choose Economic Growth and Prosperity
- Or Economic Decline and Poverty?
By Dr. Gerard Lameiro

Dr. Lameiro answers this question and many more in his powerful and important new Kindle book, Choosing the Good Life: Two Competing Economic Visions.
Today, America is at an extremely critical juncture in our history.  We are a prosperous nation on the brink of economic decline.  We are currently in the midst of an exceptionally weak recovery, following the worst recession since the Great Depression. America is following a set of high tax and reckless spending policies that are creating astoundingly high deficits and unsustainably high debt levels.  Unemployment is very high at 9.6% with the very real possibility it will increase to 11.5% in 2011.
The dollar appears to be weakening and might even be abandoned as the reserve currency of the global economy.  Gold, a potential safe haven in times of fear, is soaring to incredible heights, indicating the skeptical outlook of the American people.  It looks as if America might be teetering on the verge of a second Great Recession in 2011 or worse.  Is the economy really all that bad?  Can we do anything about the economy?
Indeed, all these questions, all these debates, and all these battles, hinge on two competing economic visions when considering whether America can still live the "good life." What are these two economic visions? What economic vision will America choose? Dr. Lameiro believes we do have a choice.
Choosing the Good Life shines a bright light on one of the greatest issues of the 21st century. It also tees up one of the most vitally important decisions you will ever make as a citizen. Indeed, this book presents the two distinct and competing economic visions for what constitutes the "Good Life."
These economic visions represent two different economic systems, two different ways of looking at life, and two different ways of living life. In fact, they are based on two opposing philosophies of life.
Today, at the beginning of the 21st century, each economic vision is fighting for your support. Your choice of economic visions will help to determine whether America will grow or decline; whether we will live in prosperity or struggle with poverty and whether we will live in peace or at war. You have enormous power as a citizen to influence, shape and decide America's future. Truly, your choice and the choices of millions of other citizens will ultimately impact and help to determine which economic vision will become reality in America and in the world.
While this book addresses citizens in America in the early 21st century, its principles and knowledge apply equally well across both time and space. The ideas within Choosing the Good Life can be applicable to citizens in other nations today, too, and likely will be relevant for generations of citizens to come in the future. In that sense, it is a classic book on economic freedom.
Written by Gerard Francis Lameiro, America's Citizen-Philosopher, this book brings with it Dr. Lameiro's engaging and award-winning style, his optimistic vision, and his uncanny ability to make the complex very simple.  Downloadable at Amazon for Kindle, it's the most important book you'll read in a long time.
Posted by Sandy Frazier at 7:22 AM No comments: 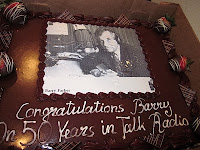 Congratulations to Barry Farber for tonight's celebration in Manhattan at the CRN studios at the Paley Center for Media - 50 amazing years in talk radio!  You're the best voice on the air - lively and still going strong!  We wish you 50 more!

Barry's talk show brings listeners wisdom, insight, and first-hand knowledge from a cosmopolitan mind and down-home heart full of charm, sweetness, and the warmth of a deep and steady inner fire. One taste and your listeners will agree that Barry Farber is to talk radio what a fine wine is to a good meal. CRN 1 M-F 5PM PT. [more...]
Posted by Sandy Frazier at 8:55 PM No comments: