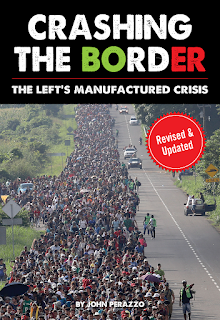 The truth behind the Democrats' deliberate strategy of "Crashing the Border"

A pivotal booklet published this week by the David Horowitz Freedom Center reveals the true stakes in the ongoing crisis engulfing America's southern border. In "Crashing the Border: The Left's Manufactured Crisis," DiscovertheNetworks.org editor John Perazzo examines the deliberate strategy employed by Democratic politicians and leftist activists to stress and overwhelm our border security apparatus to its breaking point.

The resulting crisis will then be used as a pretext to enact policies, such as amnesty, that will radically transform America's political landscape and illegally import millions of future Democratic voters. “Over the years, Americans had become so accustomed to this problem and so desensitized by all the banal explanations of its causes... that they tended to accept the tsunami of illegal migration as part of the inevitable and inexorable movement of populations away from pain and toward promise. But this was a fiction,” writes author Perazzo.

“In fact, the problem was the product of a concerted effort by which Democratic legislators and their ideological allies in the 'immigrant rights' movement sought to overwhelm and undermine America's border security and immigration system by importing millions of people who could be expected to eventually become reliable Democrat voters for decades to come.”

As Perazzo's careful research reveals, this strategy has a name and a long pedigree among leftist protest movements. “The Cloward-Piven Strategy” - named for former Columbia University sociologists and Democratic Socialists of America (DSA) leaders Richard Cloward and his wife, Frances Fox Piven - posits that activists can effect radical change by “crashing the system.” [more...]

John Perazzo is the editor of discoverthenetworks.org and author of The New Shame of the Cities.

Posted by Sandy Frazier at 7:05 AM No comments:

Nationally syndicated talk show host and bestselling author Wayne Allyn Root's new book, The Great Patriot Protest & Boycott Book is the game-changer the "silent majority" has been waiting for. This book is how we become the LOUD MAJORITY. Christians, patriots and Trump supporters make up more than half of the purchasing power in America. Yet the companies we support have turned against us - they have slandered us, offended us, bullied us, ignored us and turned us into the enemy- all the while depending on us to keep buying their products. No more. It's time to fight back!

No matter how much we protest to government officials, they don't care. Wayne believes they're all bought and paid for by China, The Chinese Communist Party and George Soros. But the corporations and their CEOs still answer to shareholders; and we can hit them where it hurts the most - their bottom line. We are the economic engine of America - the spending majority - and we have the most purchasing power. We spend the most money.

Wayne's new book contains a comprehensive list of company names, CEO names, board names, addresses, e-mail addresses, phone numbers and social media accounts of the top 100+ large companies in the USA who hate us, ignore us, offend us, and treat us like we don't matter. If millions of us use this handbook to contact these bullies, we can bring these "woke" companies to their knees, change corporate behavior, and cut off the flow of corporate donations to Democrats.

NOW YOU HAVE THE POWER!

·    Are you a conservative patriot?

·    Do you support capitalism?

·    Are you frustrated at the direction of this country?

·    Do you fear for the future of your children and / or grandchildren?

·    Do you believe in Judeo-Christian values?

·    Do you see that America is under attack?

·    Does this seem like a Socialist / Marxist / Communist takeover?

We've made it simple and EASY for conservatives, Christians, patriots, and 80+ million Trump voters to protest and boycott the companies that offend us, denigrate us, ignore us and spit in our faces. We must become the LOUD MAJORITY. Money talks and these companies need to get the message loud and clear that we're fed up with their radical, extreme leftist, anti-American politics supported by the mainstream media and the Democrats.

With this powerful book, and the valuable contact information inside, if companies go WOKE; we will make them go BROKE!

ABOUT THE AUTHOR: Known as "the conservative warrior," Wayne Allyn Root (aka WAR) is the host of the nationally syndicated show, "Wayne Allyn Root: Raw & Unfiltered" on USA Radio Network, as well as the "WAR RAW" podcast. For three years in a row Wayne has been named to the prestigious "Talkers Heavy 100" list of the top talk show hosts in America. He is also a bestselling author and a nationally syndicated newspaper columnist. A former Libertarian Vice Presidential nominee, Wayne is a fiery, passionate, enthusiastic and relentless defender of the greatest presidents of our lifetime, Donald J. Trump and Ronald Reagan. Wayne is the author of many national best-selling books and a high-profile CEO, entrepreneur and international business speaker. His web site is www.RootforAmerica.com.
Posted by Sandy Frazier at 10:01 AM No comments: