Sandy's on the Radio!

Four years ago, Fmr. Congressman Joe Scarborough (R-Fla.) stood alone in predicting the collapse of the Republican majority and the economic chaos that has shaken us all. Now he issues a bold challenge to the GOP in his new book, The Last Best Hope: Restoring Conservatism and America's Promise: reform or die. Joe Scarborough is the host of MSNBC’s Morning Joe, a show Time magazine calls "revolutionary" and The New York Times ranked as the top news show of 2008. Joe can be heard daily on his syndicated talk radio show called the Joe Scarborough Show on the ABC Radio Network. Call Sandy now to pre-schedule advance radio interviews with Joe, who will be available starting June 9th.
Posted by Sandy Frazier at 5:18 AM No comments: 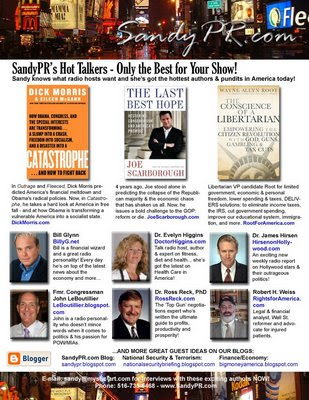 Sandy will be promoting her vast array of hot Summer authors and radio pundits at the Talkers Magazine New Media Seminar in Manhattan June 5-6 at the Concierge Conference Center. Look for her flyer in the registration bag at the door.

Go here to watch the slideshow.
Posted by Sandy Frazier at 9:18 PM No comments:

Dr. Ross Reck is known by the media as the 'Top Gun' negotiations expert. He has appeared on television, in print and on more than 500 radio stations commenting on a variety of negotiation and dispute issues ranging from the 2002 Major League Baseball labor situation to the current west coast dockworker dispute. Dr. Reck is the coauthor of Amazon.com best-seller Instant Turnaround: Getting People Excited About Coming to Work and Working Hard.

A compelling and dynamic speaker, Dr. Reck has been featured at hundreds of meetings, conferences and conventions throughout the United States, Canada, Latin America, Europe and Asia. His recent consulting clients include Hewlett-Packard, John Deere, American Express, Janssen-Ortho, Inc., the Chicago Cubs, Rolls-Royce and Xerox. Watch Ross's YouTube video: "Bosses Gone Wild." Call Sandy right away to schedule an interview with Dr. Reck!
Posted by Sandy Frazier at 7:56 AM No comments:

SandyPR.com will be promoting the best books of the summer starting in June. Dick Morris's highly anticipated Catastrophe is on its way and already making news all over Fox News Channel. His release date is June 23. Joe Scarborough's The Last Best Hope will be released on June 9. Wayne Allyn Root's long-awaited The Conscience of a Libertarian will be out June 15. Make sure you're signed up for SandyPR.com's e-mail alerts so you can stay informed about these great releases and more for your audience!
Posted by Sandy Frazier at 10:00 AM No comments:

THE PEASANT PRINCE: Thaddeus Kosciuszko and the Age of Revolution

By Alex Storozynski
Thaddeus Kosciuszko was one of the American Revolution’s most important figures and a world-wide defender of the common people. Today, there are bridges, statues, parks, schools and towns across the country named in his honor. However, few know the entire story of Kosciuszko and his many contributions to the pursuit of freedom for all. For instance, few know that he gave his salary as a general in the American Revolution to Thomas Jefferson with instructions for him to use the money to buy slaves - and free them. Now, in THE PEASANT PRINCE: Thaddeus Kosciuszko and the Age of Revolution, Alex Storozynski, a Pulitzer Prize-winning journalist and President and Executive Director of The Kosciuszko Foundation, paints a fascinating portrait of this incredible man, whom Jefferson called "as pure a son of liberty as I have ever known." Call or e-mail Sandy - 516-735-5468 - to schedule Interviews with Alex.
Posted by Sandy Frazier at 1:45 PM No comments: