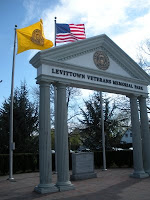 Speakers included:
KT McFarland - Political Commentator who served on Henry Kissenger's National Security Council, and Pentagon Spokeswoman during the Reagan Administration.
Brett Joshpe - Attorney and Author of "Why You Are Wrong About the Right"
David Webb - Radio host and on-air personality, co-founder of the Black Republican Forum and moderator of the American Forum Series
Here is a slideshow from today's Levittown Tea Party.
Posted by Sandy Frazier at 5:35 PM