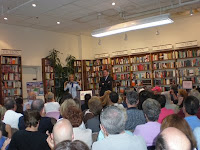 Amazon.com Sales Rank: #77 in Books
#5 in Books > Nonfiction > Social Sciences > Political Science > Political Doctrines
#13 in Books > Nonfiction > Politics
...But he's all over the place getting out and meeting the people. I saw him tonight in Huntington at the infamous Book Revue and finally got to meet the man in person. In a little over a week, he's signed books in Princeton, Paramus and Bridgewater, NJ; Westbrook and New Canaan, CT ... and in the coming week will be at the B&N in Union Square, NY, Borders at Baileys Crossroads, VA, Union League Club in Chicago, National Press Club in D.C... and more to come! His talk radio appearances have been great and you can hear him in almost every market! Not to mention his Morning Joe show on MSNBC and his ABC radio show which airs daily. He's the REAL energizer!
Posted by Sandy Frazier at 7:45 PM